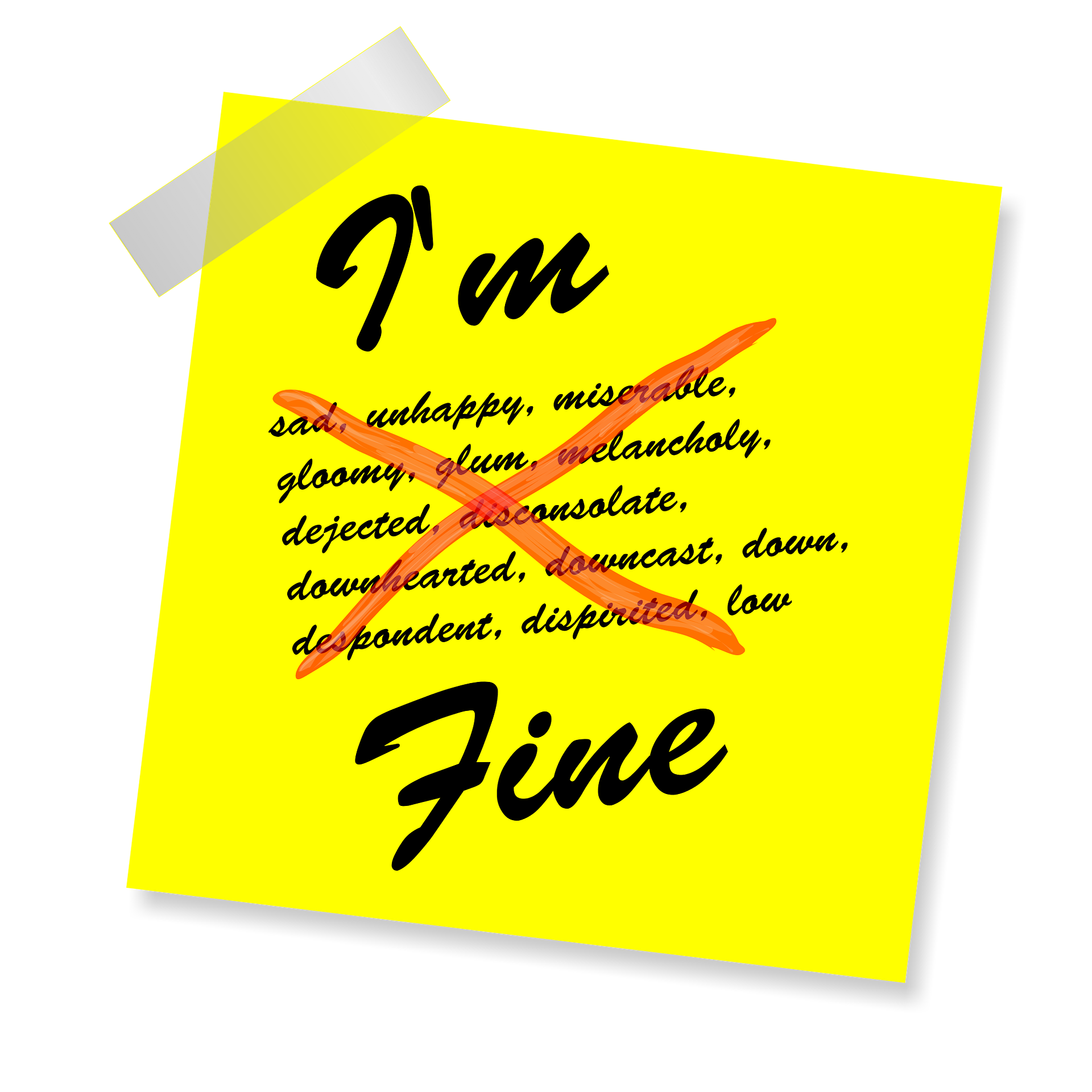 What does it mean to be ‘Fine’?

In my workplace brew room at 4.45am yesterday morning whilst waiting for the start of my shift, I heard this astonishing report.  I have since found a newspaper article which also reports on the findings.  This article explores why…

I have italicised the point, because, when you think about it for any length of time it really is startling.  Why are we, as a society so closed up about the way we feel?  Why say that you are ‘fine’ when only 19% of Brits actually mean it?  It is as if, by concealing the fact we are not indeed fine, the problem goes away.  The truth could not be more different.

We live in a fast paced world where time is of the essence.  We live in a world where we are required to be on-the-go around the clock, people don’t have time to have long conversations.  Saying you are fine means you don’t have to spend precious minutes explaining how you feel.  More importantly, the person answering doesn’t have to consider whether the questioner wants to hear about their problems.  I’m fine is a cover-all-bases response.  The questioner is satisfied in the knowledge that they have fulfilled their duty of politeness whilst the respondent hasn’t wasted any time in replying.  Regardless of the truth.

According to the Huffington Post article a staggering 59% of people who ask how another is feeling expect to be lied to.  Even when asking the question, over half of people know that the other person isn’t okay, yet the ritual persists.  How many people, in the knowledge that they are probably being lied to, have the time or inclination to follow up with a genuine intention of helping the person who is not okay?  I would like to think that most would, but the statistics suggest otherwise.

To allow another person access to our feelings requires a foundation of trust.  Feelings and emotions are complex and often result from a number of issues a person faces on one particular day.  I personally enjoy my own privacy and only talk openly to a select few people about how I truly feel on issues close to heart.  For many people, I imagine the same is true.  There is nothing dignifying or dignified about strangers and distant acquaintances prying into somebody’s personal issues.  The last thing anybody wants is to regret trusting somebody.

52% of people surveyed actively dislike discussing their feelings as doing so exposes vulnerabilities which may be exploited by others.  This is especially pertinent where a person has been hurt when they have previously opened up to someone about the way they are feeling.  However, this tendency to cover up our true emotions and feelings leads to a build up of negative emotion which may contribute negatively to a persons mental health.

#Mandictionary and the rise in suicide rates

And yet, still people are adhering to the stiff upper lip mentality which people adopted during World War 2 when people had to be OK.  The country was at war.  There were more pertinent issues to deal with.  However, seventy years on, the same approach sustains.  Why?  The statistics published by the Huffington Post have come at a time where people are being encouraged to express their emotions more, see the #mandictionary campaign run by CALM as an excellent example of encouraging men to connect with their emotions.  It is often the case that people are not okay, yet they don’t want anybody else to be burdened with their worries.  But bottling feelings and worries up is a dangerous game.  This research comes at a time when suicide rates are high.  Too high.  It is time for change.

Take time today to check in on how someone is really feeling.  Take more time to sit and talk.  More time to care.  Stop rushing.  That errand can wait, your friend cannot.  After all, by doing this maybe when the question of whether we are okay is asked, more people will honestly answer ‘yes’!