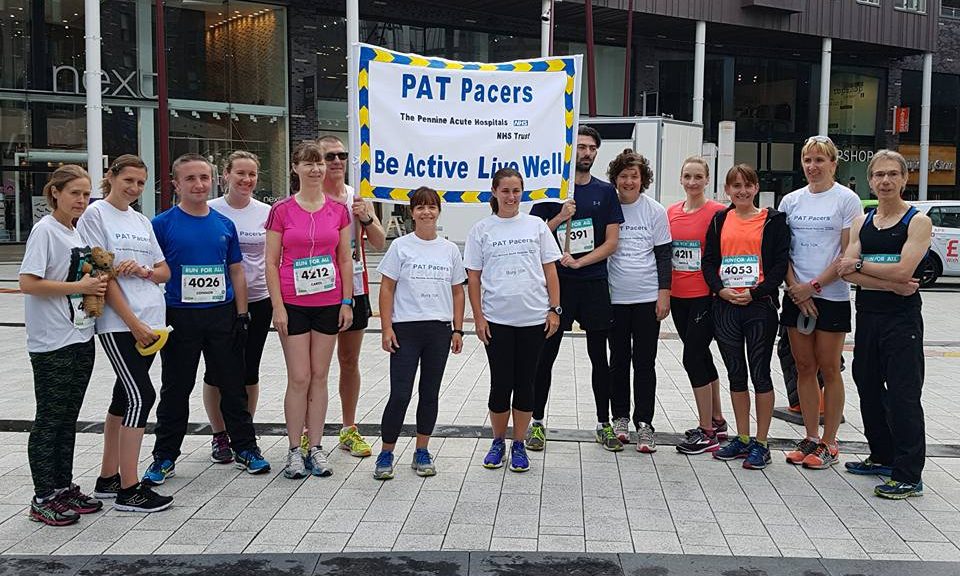 A Long Awaited Personal Best at The Bury 10k

Upon finishing last year’s Bury 10k in a time of 50:54, I vowed to improve my personal best and run a sub 50-minute time in 2017.  This year’s event provided me with the opportunity to do just that.

I was delighted to be asked to run with The PAT Pacers for a second year.  Our team had grown from the 2016 event with nineteen Pacers taking part in this years event.  Running as part of a team is always good fun and makes race day more enjoyable.  Before the race, we met in Costa to have a photo, catch up on all things running and have coffee; it was the perfect chance to catch up with people (some of whom I hadn’t seen since last year’s event!) and set the tone for the day ahead.  The I Will If You Will campaign, who support the event, aim to bring people together to exercise and our team is living proof that it can be achieved to great effect.

If you haven’t already, you can read about the build-up to the Bury 10k in my latest post.  After last year’s success, the second Bury 10k had a lot to live up to.  When an event returns for a second year you sometimes don’t get the ‘buzz’ which surrounds the first.  The organisers of the Bury 10k 2017 made sure that wasn’t the case here.

I am level with the 55-minute pacer as the pistol fires.  A few seconds pass as I nervously bound up and down waiting for the inevitable surge forward.  The excitement is palpable.  At first, we walk, then run towards the line.  The race begins.

I promised myself that I wouldn’t look at my watch for the first mile.  I concentrated on working my way through the crowds.  Within a few hundred metres of the start line, the course narrows to turn left down Silver Street past one of Bury’s most highly regarded pubs, The Clarence, before sweeping left again to connect with the main road.  The pavements must have been three deep with supporters all the way around the town centre section of the route.  The atmosphere was buzzing.

As the race took the same route as last year, I was aware of the need to push hard for the first four miles of the race before beginning the incline back to the town centre.  It was not a surprise that my first mile would be the fastest of the race.  Just over five more miles to go.

I knew that I had made a good start, better than I had anticipated.  As I ran down Manchester Road I passed Holy Cross College to the left of the course where I enjoyed two successful years completing my A Levels.  Shortly after, I turned right to run beside Redvales Park where I began to really see the difference in my fitness levels just eighteen months ago.  Both places have given me the strength, both mentally and physically, to take my fitness to another level and it was going to pay off here.

Running down the residential Whitefield Road was tricky as the road became quite narrow; it was difficult to avoid bumping into other runners but by keeping to the edge of the road I just about managed, save for one near miss when somebody cut sharply across my path from left to right and nearly tripped over my left leg in the process!  More by luck than judgement, we didn’t make contact.  Disaster averted and rejoining the main road we passed a busker on the left-hand side of the course who provided a well-needed morale boost before the run down to Dumers Lane.

The next time we passed a crowd of supporters would be at the halfway point.  For the second year running, The Street Shakers performed at the entrance to Close Park.  Their routines, set to up-tempo dance tracks, were the perfect motivation for the second half of the race.  How they kept dancing for the duration of the race I’ll never know – maybe I will join them for a class in the future!  No sooner had we left The Street Shakers behind, we passed the water station.  Although the offer of water was tempting, I never drink whilst I’m training and I knew that I risked losing precious time trying to pick up a bottle here.  Instead, I picked up my pace.

Whenever anybody has asked me what my fitness goals are this year I have replied ‘running a sub 50-minute 10k’.  I wasn’t about to let my goal slip away.

My Garmin bleeped to signal the four-mile mark and although I was tiring I knew I was in with a serious chance of a personal best.  Not just knocking one or two seconds off it but shearing nearly two minutes off last year’s time!  My breathing was steady, my arms loose but my legs had stiffened slightly.  I had ticked off two successive 7:50-minute miles at miles 3 and 4 but now my pace dropped to 7:57 and the lactic acid kicked in.

Since the right turn onto Dumers Lane, I had kept pace with a Burnley supporter with ‘Chadwick’ printed on his shirt.  He became my pacesetter for much of the course, similar to the man in the blue shirt who I chased during a 5k at the start of the month.  That is not to say that I sit behind every runner I encounter.  I am sure that, over time, I have done the same for others.  However, I often find myself focusing on somebody who is running just faster than my target pace in order to finish in the fastest possible time.

The Last Mile of the Bury 10k

Ironically, I didn’t know that I was running the last mile until it was well underway.  I must have heard my watch bleep but I don’t remember looking down to check my mile split.  Going out hard did have its benefits but I knew that I was bound to slow down in the second half of the race.  I had time to spare but I had to keep pushing.  After the four-mile mark is where I lost a lot of time just one year ago.  I dug in battling the temptation to ease off.

When I checked over my mile-split data after the race, the sixth mile was my slowest, but by then it didn’t matter.  The previous five were my best by far.  The roar of the crowd lifted me once again and I surged towards the line.

The realisation that I was about to achieve my year-long target dawned on me as I re-entered the centre of Bury.  I’d been ahead of schedule for most of the race but didn’t get ahead of myself.  As I turned to run down The Rock, somewhere more familiar as my first place of work than as a running route, the crowds shouted encouragement.  After a moment or two I realised that complete strangers were shouting my name; it was printed on my running number!  They must have done the same for each of the two thousand runners that took part, it really was a special atmosphere.

I was elated, pumped and let out a roar as I crossed the line!  My watch confirmed that I completed the race in 49:08.  Mission accomplished.